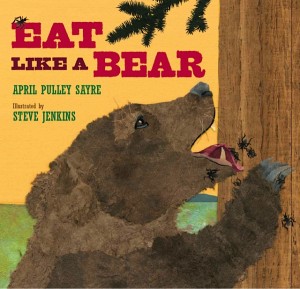 Raising my bowl of blueberries this morning to illustrator Steve Jenkins. Our book, Eat Like a Bear, which received three starred reviews, was  named an ALA (American Library Association) Notable Book for 2014! It is a huge honor to be chosen for recognition by the ALA Notables Committee—especially in a year with such a great crop of books. By tradition, the list also includes winners from ALA award categories, too.  Steve and I have three more projects in the works. Next up is Woodpecker Wham.