Raindrops Roll , which has received two starred reviews, one in Kirkus, one in School Library Journal, comes out with Beach Lane/S&S on Jan 5, 2015.  Each photo I took has a special meaning to me and some have hidden creatures in them. So this blog covers the behind-the-scenes secrets and science. For instance, the droplet-covered leaves on the cover are lupine. That’s the same kind of plant made famous by the children’s book, Miss Rumphius, by Barbara Cooney. The plant produces a tall spike of bluish/purplish flowers. In Indiana, my husband planted several native lupine plants in small flower beds he created. Each year the plants flowered and formed pods. The pods dry and fling seed out of the flower beds. Those plants sprouted in our lawn. My husband mowed around them so the flower bed became bigger and bigger. So, now we, too, have plenty of lupine and the seed pods.  To see one of seed pods, look through the book. Hint…it’s not just seeds that “fly.”  (By the way, there’s a tiny fly in the front cover photo. Can you find it?)

The big heart-shaped leaf is a young leaf of a Redbud tree I planted. Every year leaf cutter bees cut pieces of this tree. But you’ll have to wait for another book to see those cut leaves!

This is a a cup plant, which is a native prairie plant. My husband, Jeff Sayre, took the photo of the gray tree frog in that plant. That year our cup plants had lots of tiny red insects eating them so these leaves are very chewed up and brown. The exoskeletons of the insects are left on the undersides of the leaves.

The bird is a mourning dove.

The insect inside the red lily is a juvenile katydid. Katydids look much different as adults.

The fly is inside a lupine pod. The first time I photographed this plant I was just trying to take a photo of the pod. But when I went indoors to look at the photo on the computer, as is often the case, I saw something else—this time, the fly hiding in the pod. So I ran back outside to photograph it more clearly.  FYI: The orange flower behind it is not a lupine. It is a butterfly weed, a kind of milkweed that monarch caterpillars eat.

Those leaves are oak leaves right outside our house. I actually took the photo from the back window of our house so I was sheltered as it poured rain.

This bird is a bluejay. Bluejays, wet with rain, look gray. That’s because their blue color is a structural color, caused by the microscopic structure of the feathers. When rain wets the feathers, they do not bounce light the same way, so they do not look blue. They look gray. (Things that have pigmented colors, instead of structural feathers, would still look brighter blue even when wet.)

This insect is camouflaged to look like a leaf. It is an adult katydid. (A juvenile katydid appears elsewhere in the book. Not sure they are the same katydid species but they are both katydids.) One of the famous “sounds of summer” is actually made by katydids rubbing their wings together to create their call at night. It sounds a bit like katy-did, katy-did!  See that pumpkin? It’s photographed at the South Bend Farmer’s Market where I photographed Rah, Rah, Radishes: A Vegetable Chant; Go, Go, Grapes: A Fruit Chant! and Let’s Go Nuts: Seeds We Eat. One day when I was at the market it rained. I ran outside to photograph a rainbow but then realized all the vegetables were washed by rain so I photographed this pumpkin, and others, too.

This is a tiger lily plant. Raindrops make little noises as they splash against the broad, hollow plant stem. Look for a tiger lily flower later in the book. Can you find it?

This is a salamander. Like most frogs, most salamanders need watery areas to lay their eggs. So rain is important in their lives! I photographed this one in southern Illinois.

This plant has waxy leaves that repel water. So the water “beads up” on the plant.

This rainstorm water was gushing down a little trail in southwestern Michigan, near where I live.

This cabbage white butterfly inspired the book. I took a photo of it and when I looked at it on the computer, I was amazed to see the raindrops clinging to its head and legs. Soon, I became obsessed with photographing raindrops on things.

Cabbage white butterflies do, indeed, lay eggs on plants in the cabbage family.

Notice all the different sizes of raindrops on this daisy. When two water droplets are so close together that they touch, they usually join to form a single, larger droplet.

These droplets are on an herb called bronze fennel. It is a feathery green/brown/gray plant. When you crush its thin, spiky leaves, they smell like licorice. Black swallowtail butterflies lay eggs on this plant so it can be good for wildlife in northeastern gardens. But in other places, such as southern California, where the winter doesn’t kill it back, this plant can be a pest. It is invasive. It escapes into wild areas and grows thickly, outcompeting native plants and endangering habitats.

This is a leaf of a member of the cabbage family.

This is a black swallowtail caterpillar. The one in the book is munching dill flowers. This one is munching fennel.

The flower with “dots” of rain on it is lantana, a popular landscaping plant that attracts butterflies.

Look for a terrific reflection of the entire stem in the raindrop near “drip!”

Remember the tiger? On the left page is a closeup of a tiger lily plant.

What needs wet areas? Moss! Underneath the slug is moss. This slug was photographed in Ohio.

What comes after rain? Mushrooms!  A few days after heavy rains, mushrooms may begin to push up from the ground. The yellow ones in this photo are called “Yellow Earth Tongues.” They were photographed at a wild area near Fernwood Botanical Garden in Michigan.

This raindrop is on an evergreen conifer. Evergreen means it does not drop its leaves all at once. Conifers bear cones. The shape of the entire branch is reflected in the raindrop. The two rectangular flashes on my camera are also in the raindrop image.

Hundreds of tiny spheres of water formed on the spikes of this plant after it rained.

On the right page, sticking out of this beautiful plant, is a hidden creature. An earwig!Can you find it?

This web is decorated by raindrops. But on some mornings you may see spider webs covered with droplets not from rain, but from dew. Dew-covered webs sparkle in the morning sunlight.  They’re often nicknamed “fairies’ washing” because people imagine fairies would wear such sparkly garments and put them out to dry on the shrubs and grasses.

Pages 41-42  This bumblebee is feeding at a wild senna, a midwestern tallgrass prairie plant.

Pages 43-44 The flowers on the copyright/acknowledgments page are actually cup plant flowers. Do you remember where else you’ve seen the cup plant in the book?

(The frog was in it at the beginning!)

Back Cover  This is a grackle in the rain.  If you see a flock of blackish birds some of them may be grackles. Grackles and red-winged blackbirds often travel in flocks together.  Some grackles are brownish. Some adult male grackles look black in certain light yet in other light they are bronze, green, and purple, like this one in the rain.

Are all the raindrops in the book real? YES. Many times, as I waited for another rainstorm in order to take a certain photograph, someone would say, “Why don’t you just spritz it with some water from a bottle?” Nope. Not the same. I would know. And I don’t know how such droplets would differ from what is presented when raindrops fall and land on plants and animals. Besides, nonfiction should be real—and manmade raindrops would be fake to me. 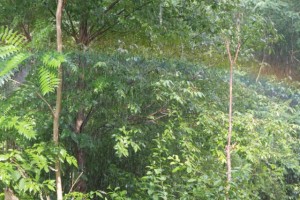 Finally, here’s a photo that we considered for the book but did not go in. It’s a rainbow…eight feet off the ground in my backyard! It rained in my backyard while it was still sunny in the front yard and this tiny rainbow formed for just a few minutes. 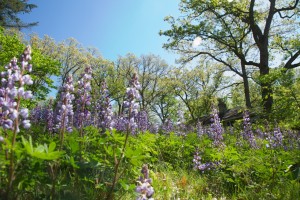