Being Frog hops into stores Feb 2, 2020! Read the Kirkus starred review or the Publisher’s Weekly starred review or the starred review from the Bulletin for the Center for Children’s Books. This picture book from Beach Lane/Simon & Schuster is about empathy and exploring another being’s world. Want to hear the frogs? Listen below. For a recent article about my work, check out the Booklist Online interview “Instilling Wonder Talking Science Writing With April Pulley Sayre”.

Raindrops Roll , which has received two starred reviews, one in Kirkus, one in School Library Journal, comes out with Beach Lane/S&S on Jan 5, 2015.  Each photo I took has a special meaning to me and some have hidden creatures in them. So this blog covers the behind-the-scenes secrets and science. END_OF_DOCUMENT_TOKEN_TO_BE_REPLACED

Preschool teachers rock! This teacher’s joy lifts my spirits every time I watch the video. While signing Rah, Rah, Radishes and Go, Go, Grapes last year in Atlanta, I met this fabulous teacher who agreed to share how she gets the 4-year olds in her class to try foods. The video is on my youtube channel. Jeff and I have also posted some of our nature clips on our Sayre Nature Youtube Channel. 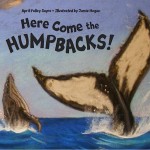 SB&F (Science Books and Films) October issue gave Here Come the Humpbacks! a starred review and then a second star for being Editor’s Choice!

It was also named an Outstanding Science Trade Book by NSTA.

Event kits for this book are still available .

Among my books, the most widely used one worldwide is ONE IS A SNAIL, TEN IS A CRAB. It’s been adapted for curricula from Australia to Canada. This book is classified as nonfiction although the text is nonfiction and the illustrations are actually fictional. (At least in my experience, crabs do not ride inner tubes.) It introduces a way of thinking that leads, apparently into algebra. It counts from 1-100. So, when I looked at the Common Core, I could see why this book has been embraced by the math community. Here are the standards that I could see immediately related to the book. A trained math teacher would likely find many more.

Yet there are ways math teachers can use lots of children’s books to complete Common Core.

CCSS.Math.Content.2.OA.A.1 Use addition and subtraction within 100 to solve one- and two-step word problems involving situations of adding to, taking from, putting together, taking apart, and comparing, with unknowns in all positions, e.g., by using drawings and equations with a symbol for the unknown number to represent the problem.1

Lesson Plan for One Is a Snail, Ten Is a Crab

Other activities related to One Is a Snail, Ten Is a Crab

One Is a Snail Worksheets

Studying seeds and plant life? Working on nutrition or ecology in preschool through second grade? I hope this will help. My newest book, Let’s Go Nuts! Seeds We Eat was released this week by my marvelous publisher, Beach Lane, an imprint of Simon & Schuster. It’s a chant but with lots of, should we say, chewy endmatter. Once I started working on this book even I was amazed by just how many foods we eat are made from seeds. Just check out the pantry. Corn. Wheat. Lentils. Almonds. Soy milk. Popcorn. Pumpkin seeds.  I’m still eating some of the dried beans that made up the photos in the book. It was photographed at the South Bend Farmer’s Market, Bamber’s Superette, Saigon Market, and other local food spots, including Notre Dame University’s South Dining Hall!  END_OF_DOCUMENT_TOKEN_TO_BE_REPLACED

Let’s Go Nuts! Seeds We Eat is a chant which introduces children to beans, nuts, grains, and spice seeds. Endmatter explains why seeds don’t grow inside our stomachs, why seeds are such great food, and how seeds fit into biology, ecology, and culture. This book completes the trio of books that includes Rah, Rah, Radishes: A Vegetable Chant  and Go, Go, Grapes: a Fruit Chant.

Eat Like a Bear, my book  illustrated by Steve Jenkins and published by Henry Holt, just received a starred review in Publisher’s Weekly. Kirkus reviews also gave it a starred review.  I’m excited that folks “get” this book. I was so pleased with every word, illustration, design choice on this project. It was a great team effort.  Tilt the cover and check out the shiny ants. Notice the designer’s great backmatter fonts and layout. See a few pages on Henry Holt’s website. Okay, so I’m a little stoked about it. Guess what else thrills me: Steve Jenkins has signed on to illustrate my next three books with Henry Holt! Need I say more? Yes. Another Steve Jenkins book, one which he wrote, The Animal Book, received a starred review in PW this week. Go, Steve!